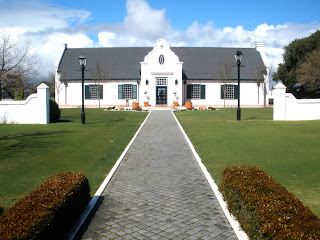 The entrance to Voyager Estate is extremely grand. You have to drive along a long driveway, past a number of vineyards and then come across one of the largest Australian flags (on a flagpole of course) you'll ever see. To give you an idea of the enormity of Voyager's grounds; Voyager own 300 hectares of land, of which, only 100 is under vine.
Once you leave the car you're confronted by a beautifully manicured garden. It interested me to see 5 people working in Voyager's garden but none in the vineyards. I spoke to one of these gardeners who told me they used to work in the vineyards, but opted for a transfer. Supposedly this is common at Voyager.
The tasting room is as grand as the entrance. It's housed in a building with a slight French chateau-like feel to it. Once inside, I was completely blown away by the large number of wine related items for sale, but this was the Margaret River and I'd become used to this by now. Just as I'd seen at other cellar doors in the region, the tasting bench seemed to lay in the shadows of a souvenir shop.
The tasting was hosted by a young woman on this particular day. Voyager was relatively busy, but she didn't seem terribly enthused or in the mood for conversing. The host gave us the exact same, premeditated background information on all the wines she gave the group before us (who was standing next to us) and then proceeded to recycle those same lines on the next group who arrived.
I thought I'd test her to see if she knew anything else about wine (other than what she was saying to everyone).
When she poured Voyager's Chenin Blanc she gave us a big (premeditated) spiel like she knew an awful lot about the variety, so I asked her what she felt about Coriole's Chenin Blanc, as Coriole make arguably Australia's best known chenin blanc. Not only did she admit to not being familiar with the wine, but she told me she'd never heard of Coriole. Nuff said.
On top of this she really wasn't interested in being too talkative. I was contemplating buying some bottles from Voyager after lunch, despite the fact they were a little more expensive than discount retail prices. I don't mind paying a little more for bottles from cellar doors, as I find when they're opened in the future it can bring back memories of the purchasing/tasting experience, taking me back to distant, memorable holidays. Almost like drinkable mementos. Unfortunately Voyager's customer service made me think; 'bugger it'. This runs in contrary to someone like Jamie at Howard Park, whose service got me in a good mood and made me purchase a bottle when I hadn't necessarily intended to.
Funnily enough we'd been warned about Voyager Estate by another Margaret River cellar door hand who told us; "that place makes me sick". Stated person said the same thing about Leeuwin. Regardless of this I was in search of fine wine, not fine service.
THE WINES
The Tom Price wines aren't available for tasting at cellar door, but that didn't bother me as they're not my favourite Voyager wines by any stretch. The entire range is looking pretty good really, especially considering they're a bit overpriced at the cellar door. I so wanted the 2004 Cabernet Sauvignon Merlot to be something exceptional (like the 2002), but its extravagant ripeness saw it fall a fraction short in my eyes. The chardonnay was the only real let down, as it normally tickles my fancy.
Voyager Estate Sauvignon Blanc Semillon 2008 ($24)
Its fragrance shows a synergistic blend of both varieties, with savvy influenced gooseberry and lychee merging with semillon derived lemon/lime citrus, with hints of mineral and dry straw starting to emerge. Full and round, the palate is marked by wonderfully racy, zesty acids and great shape. (reviewed separate post) 92
Voyager Estate VOC Semillon 2006 ($40)
Light, woody, matchstick like nose with hints of melon and some development beginning to emerge. Palate is quite forward and juicy with refreshing acids, but needs more drive. Could be going through an adolescent stage. Very expensive Margaret River semillon really, but certainly not the best. 90
Voyager Estate Chardonnay 2006 ($42)
Usually one of my favourite Voyager Wines but this didn't quite pack its typical punch. Grapefruit, melon and butter vanilla oak nose. It's an elegant wine with fair shape, but its acidity does all the talking in the finish as it fruit dives away. 89
Voyager Estate Chenin Blanc 2008 ($20)
Off-dry style which still clocks in at 13% alcohol. Lightly floral, musk and guava nose. Light and soft, its palate finishes slightly sweet, yet clean and gentle enough. 87
Voyager Estate Shiraz 2006 ($32)
Unquestionably, Voyager's is usually one of my favourite shiraz from the region. From a poor year the 2006 is slightly floral, with ruby red plum and cinnamon aromas. Its elegant palate is surprisingly soft yet plushly fruited (small viognier component?) Its much gentler than previous Voyagers, without that searing intensity which normally hallmarks their style. Great wine for the vintage though. 92
Voyager Estate VOC Merlot 2007 ($40)
Lifted cherry and plum aromas with touches of cedar, vanilla, spice and floral accents. Its palate is smooth and polished, with medium-bodied juicy fruits. It's a very clean, even merlot from a great vintage for the variety. 90
Voyager Estate Girt by Sea Cabernet Merlot 2004 ($24)
Light and fresh, fruit forward, clean red berry fruits with hints of herb apparent. The palate is more light-medium bodied yet vibrantly flavoured with fine tannins providing good structure. Good value. 90
Voyager Estate Cabernet Sauvignon Merlot 2004 ($60)
Heavily ripened, sumptuous wine almost at the Barossa shiraz end of Margaret River cabernet. Its powerful, dark and brooding, with great depth, structure and length. Perhaps a touch ripe and meaty for a higher rating, but very good nonetheless. (reviewed separate post) 94
Posted by Chris Plummer at 1:16 AM