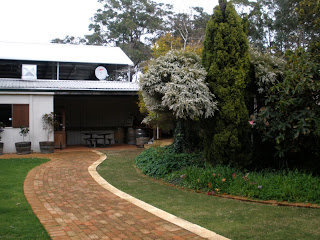 First stop on the Margaret River trip was straight to Woodlands. Woodlands have been doing magnificent things with the red Bordeaux varieties lately, in all shapes and sizes, and extremely generously priced too.
Unfortunately Woodlands wines are nigh on impossible to get in South Australian retail, hence my haste to get there. One of Woodlands' employees assured me there was a retail distributor for their wines in SA (contrary to what their website says). I was told it was Melbourne St Fine Wine, but honestly, I really had to pry that answer out and I even named the store for them. I mean, I've never seen any Woodlands' wines there. Fortunately I'm now on the mailing list, so I don't really care anymore.
The Woodlands cellar door is a more traditional set up, and very different to some of the Margaret River's other successful wineries. No fancy restaurant, no art gallery, no manicured garden and no humungous souvenir store at Woodlands. You could be forgiven for thinking you've just walked into a winery!
Career choice dilemma?
A young girl named Emma, who had just celebrated her 21st birthday, was in charge of the cellar door. I really liked her. She was exceptionally different, quirky and perhaps even eccentric, yet very friendly and willing to talk. She was more than apt at discussing wine and non-wine topics, which I think is essential for people in her line of work.
To be honest I think we felt an instant connection to her. It's rare that someone so young works alone in a cellar door, and equally as rare that people as young with a vested interest in wine would walk into that cellar door. Hence the connection. She certainly opened up to us on some interesting topics....
Emma told us she wanted out of the Margaret River, so she could move to Melbourne. I asked why you would want to leave such a lovely place and job, and what exactly she intended to do in Melbourne. Other than the obvious answer, which was shopping, she said she intended to go to Melbourne to chase footballers! An intriguing career move indeed! Huge Collingwood fan she was.
The Curse of the Margaret River
Emma certainly told us some interesting things for sure, but one really stuck out to me. This was about the curse of the Margaret River, something I've never read about in any wine books or Margaret River tourist information brochures.
Supposedly no Aboriginals live in the Margaret River. From what I was told there was an issue with genocide there many years ago, much like the more publicised Tasmanian one. The Aboriginals as such put a curse on the land, and now don't return there.
I thought about that for a second, and then looked at it from a wine point of view. If there's one Australian wine region that's experienced great luck with environmental conditions recently, it would have to be the Margaret River (perhaps Tasmania as well ironically), which has endowed excellent vintage after excellent vintage.
Given the extreme climatic conditions endured by some South Australian regions lately, I feel it's a curse we could do with too!
THE WINES
Woodlands Chardonnay 2008 ($20)
This wine really impressed me at cellar door (I was thinking about 90pts), to the point where I bought a bottle. Initially it seemed to possess brisk acidity and good length, with fairly bold fruit/oak characters. After the whole bottle went down the bold, forward flavours remained, but that brisk acidity and length wasn't as impressive. (reviewed in separate post) 88
Woodlands Cabernet Franc Merlot 2008 ($20)
Like the chardonnay this really impressed at cellar door (I was thinking 90-91pts), but also like the chardonnay a whole bottle left me disappointed. At cellar door it showed a very lively, cabernet franc influenced nose of dark berry fruits and fine oak with dusty, herbaceous notes, followed by a plate with great intensity, length and lingering flavour. A true look at this showed me its intensity was pushed through by astringent acidty, but it certainly lacked great depth or length of fruit. (reviewed in separate post) 85
Woodlands Margaret Reserve 2006 ($42)
A bit of an Emma treat as the 2007 is current vintage. It revealed plenty of tea-leaf and berry compote aromas, with muddy, earthy tones and the expected lack of even ripeness from 2006. The palate didn't have great structure but did have good depth of flavour, making it a lot better than many other 06's. 88
Woodlands Margaret Reserve 2007 ($42)
Cabernet Sauvignon (67%)/Merlot (17%)/Malbec (16%). The 2004 and 2005 release of this wine were some of the best value reds in Australia from their respective vintages, and the 2007 is no exception. Its nose immediately proclaims its place of origin with smoky/toasty oak, cassis, violet florals and crushed herb aromas. The palate contains Woodlands' typical length, intensity and structure, with superb drive and a lingering finish. A great 2007. (full review soon) 95
Woodlands Emily 2008 ($42)
Another Emma special, as this wasn't on their 'true' tasting list. It's an unusual Bordeaux blend with all 5 varieties present, but the dominant varieties are merlot and malbec. Quite simply it was an absolute delight, one of the real highlights of the whole trip. Its beautifully soft, elegant and seamless palate shows a synergistic blend of its varietal make up, with dark, lusciously fruited complex flavours running along a concentrated, velvet-like texture. Look out for 2008's? 95
Woodlands Robert Cabernet Sauvignon 2006 ($100)
Woodlands release their most expensive wine with the name of a different family member each year. I'm not sure who Robert is, but he might have missed out with this wine, as I'm not sure why this wine was released. It contains the inconsistencies typical of 2006 Margaret River reds, and is definitely not up to $100 standard, but I haven't tasted a 2006 Margaret River red which was. 88
Posted by Chris Plummer at 12:47 AM