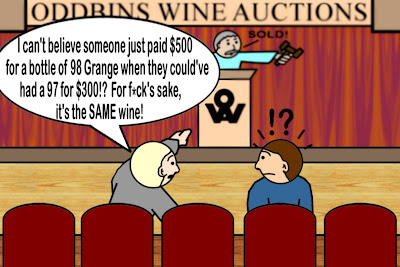 Here's the first in a series of posts which I promised a while back but have yet to deliver. It's semi-inspired by an old wine lecturer I had, who used to drill home to my class how well educated on wine the general Australian drinking public is. Australian drinkers may seem well educated on wine if you've worked in the wine industry for 40 years and all your friends are wine experts, but from where I sit it's a different story.
The Worst Wine Lines posts are not about misinformation on part of your standard drinker, which are just too rife for me to even bother about, but about misinformation on part of people working within the industry. Which is of greater concern in my opinion. And so the story goes...
About two and a half years ago I was dining at the Goodwood Hotel in Adelaide. Having just ordered the mixed grill for main course, it was time to find a suitable red as an accompaniment.
I glanced over the wine list, which wasn't exceptional, but it did have a very basic back vintage list. The wine which stood out to me was a 1999 of Penfolds Bin 28 Kalimna Shiraz, priced quite fairly at $35. At the bottom of the wine list I noticed the Goodwood allows patrons to purchase any wine of their choice from the adjoining bottle shop, with a mere $7 corkage fee. So before I knew it, I was walking next door to the adjoining bottle shop.
The thought of the '99 Kalimna had me in the mood for something more mature, so I browsed through the Goodwood bottle shop's back vintage section. I found a '99 Kalimna with a $22 price tag - did some quick maths - and realised at the very least my walk had saved me $6. Out of sheer desperation, or perhaps unadulterated optimism, I delved deep through their Penfolds collection looking for a '98 or '96 Kalima, my favourite vintages of this particular wine. No luck with the '98 or '96 of course, so, with time running short (and company waiting) I grabbed a '99. Then, I was approached by the bottle shop attendant.
He was a reasonably young chap, who appeared to be in his early-mid 20's, much like myself. "May I help you with something there?" he quipped. I'd pretty much made my selection but I thought I'd try my luck with the preferable vintages. So, with bottle of 1999 Kalimna in hand I asked; "You don't happen to have a 1998 of this wine sitting around somewhere do you?" To this he replied;
"Nah sorry mate. At that age it's pretty much the same wine anyway. The difference between a 9 year old red and an 8 year old red is essentially nothing. It'll taste the same really. One year makes very little difference in red wine."
It certainly wasn't the best wine information I've ever been told.
Lack of understanding about vintage variation as well as the aging process are two of the biggest misconceptions about wine I encounter within the Australian drinking public. The amount of times I've heard theories such as 'the older the better for reds' or 'white wines can't age' is incredible. As well as this, most people I know drink the same quaffing wine year in, year out, without even realising they're actually buying a different product almost every 12 months. Still, if they don't know the difference, who cares? Right?
Basic education of the drinking public is paramount in furthering Australia's wine industry, but even more important is teaching some basics to people within the industry. Especially if they're going to try to educate the public themselves.
Posted by Chris Plummer at 3:13 AM