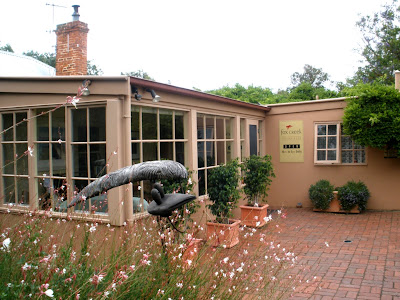 Ah Fox Creek, what happened to you? If someone had asked me three years ago who I thought were the best producers in McLaren Vale, Fox Creek would've rated right up there in my top three. I still remember vividly the joys of drinking their 2004 releases of Short Row Shiraz and Reserve Shiraz, both standout wines from a standout vintage (the Fox Creek entrance sign on Malpas Road still displays the award won by the Reserve Shiraz back in 2006). Today, things are a different story.
The run of difficult vintages has had its toll on Fox Creek's popular reds, with every single one I tasted showing the tell tale signs of uneven ripeness. It saddens me that the highlight of the current range is a rather juicy, varietal verdelho. I can only hope things turn around soon for this McLaren Vale winery with an international presence, as I know they're capable of much better.
Here are my tasting notes from yesterday's cellar door visit. The 2006 Reserve Cabernet Sauvignon ($40.50) was unavailable for tasting, but my review from January 2008 (it's still current vintage) had it as 'over ripe, unbalanced, lacking length and structure - 84 points'.
Fox Creek Shadow's Run Sauvignon Blanc 2009 ($12)
A punchy, pungent savvy with a dirty fruit profile. Lacks freshness and zip. 81
Fox Creek Verdelho 2008 ($17)
Announces good character to both aroma and palate, with slightly spicy, juicy melon fruit flavours presented in an easy drinking, refreshing style. 88
Fox Creek Red Baron Shiraz 2008 ($17.50)
Very meaty, stewy nose transfers over onto a rather simple palate, which tastes a bit like the remnants of an overcooked BBQ. 81
Fox Creek Shiraz Grenache Mourvedre 2008 ($17.50)
Certainly one of the more evenly ripened of the Fox Creek wines, but it could just be its youthfulness speaking out. It's a lighter rendition of its blend, with some juicy berry flavours framed by a slightly rustic spice character. 87
Fox Creek Duet Cabernet Sauvignon Merlot 2006 ($19)
Its leafy, blackcurrant fruit nose shows some promise, without the meatiness of other wines, leading in to a more light-medium bodied palate which although inoffensive, isn't terribly exciting. 87
Fox Creek JSM Shiraz Cabernet Sauvignon Cabernet Franc 2007 ($22.50)
Dead fruit character on nose, which lacks vibrancy and lift as a result. Once again the palate is a lighter, thinner style, lacking in fruit concentration and balance. 85
Fox Creek Short Row Shiraz 2007 ($28.50)
Once again dead fruit coming through on the nose, in a heavily raisined fashion. Its syrupy palate doesn't hold together very well and won't be getting any better over the short term. Three years ago I believed this was one of the Vale's up and coming labels, now, I'm not sure what's going on with this label. (In fairness the old couple tasting next to us took a bottle home, so I'm sure it still has its fans) 84
Fox Creek Reserve Shiraz 2006 ($70)
Admittedly I quite enjoyed the 2005 Reserve (93pts) but this I did not. It possesses a rather jujube-like fruit nose with raisin and currant aromas presented in a slightly stewy, confectionery fashion overlaid by smooth, sweet oak. The palate is lighter than anticipated, while lacking any serious stimulation in the way of texture, length, vibrancy or structure. It is probably the best of Fox Creek's present lot (just) but that's not saying much right now. It certainly fits within the other wines stylistically, just not by price. 87
Posted by Chris Plummer at 2:24 PM