Oz Wine Toons recently celebrated its 50th incarnation, so I thought I'd take a momentary break from its madness, to slightly open the vault on what goes on behind the scenes...
When I first started Oz Wine Toons, I used to just go straight from my head onto the computer screen. But then, one day, I did a quick sketch first... 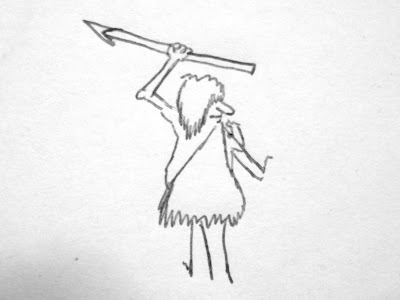 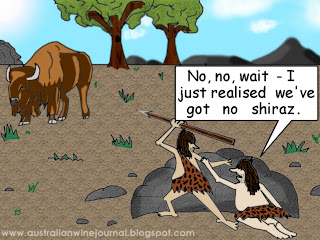 My first ever Oz Wine Toon draft was born out of the question; 'how do you draw a caveman?' I was so impressed (and surprised) by my ability to translate an image from paper to screen, that I kept going.... (this particular toon remains one of my personal favourites by the way). 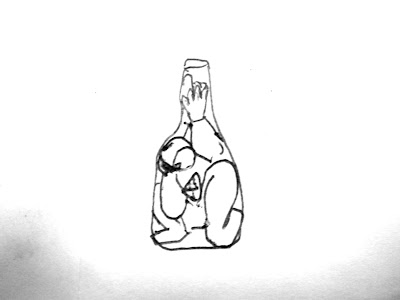 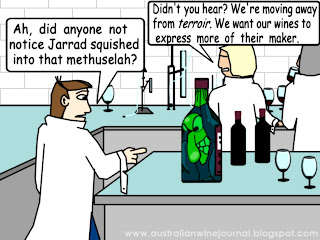 Similarly, the second sketch was born out of the question; 'how do you draw a guy squished into a wine bottle?' 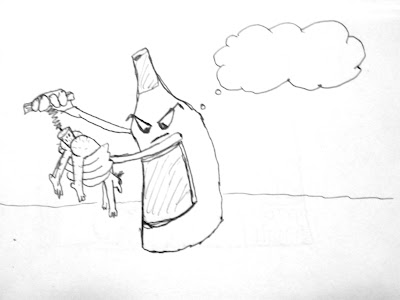 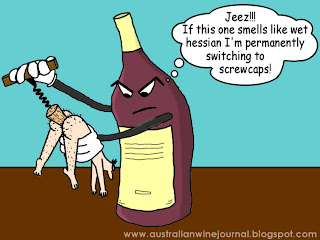 Looking at these two images, now, I'm not sure this toon actually required text. 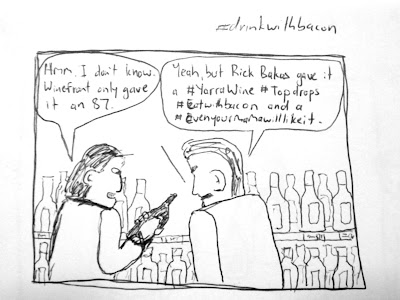 Perhaps because this toon was directly inspired by a fellow blogger, the original sketch here says 'Wine Front', which eventually became 'Halliday' in the finished version. Likewise, #eatwithbacon was corrected, because wine is something we're much more likely to #drinkwithbacon. 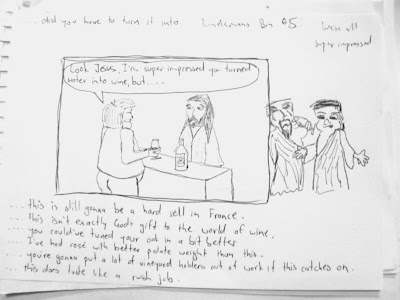 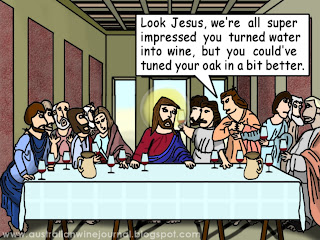 I completely changed my mind on this toon. The original shows Jesus presenting his own wine at a tasting, which I changed to an image of The Last Supper, just because I wanted to try and draw something with a bit of class for once, where it ended up taking longer to complete than any other Oz Wine Toon. The joke didn't actually change, just the scene, and the sketch here shows several punch line alternatives I was playing around with. 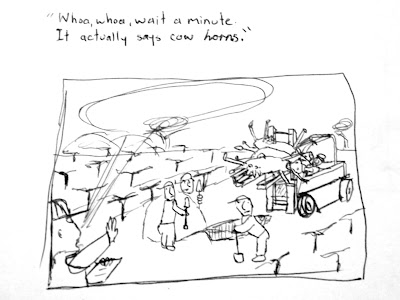 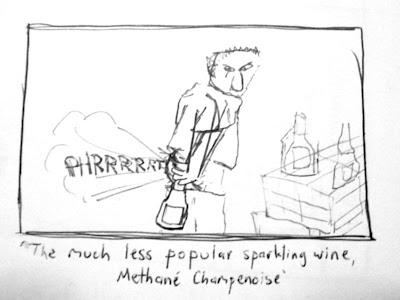 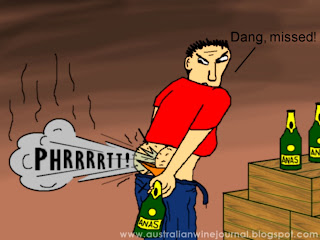 Oz Wine Toons at its absolute crudest. In the finished version, I wasn't happy with the character's aim, as it looks like he's missed the bottle (completely unintended by me), so I inserted the text 'Dang, missed!' 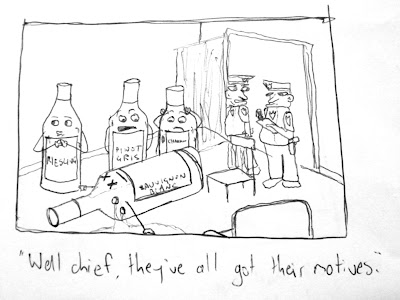 One of my personal favourites, for its simplicity and bluntness. I wish I could come up with toons like this more often. 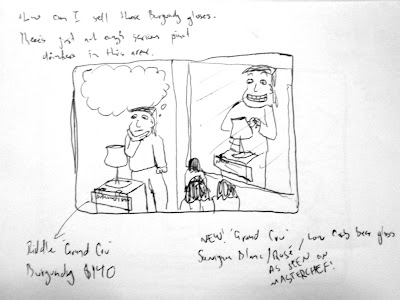 This toon is merely an exaggeration of something I experienced in real life. With a salesman, of course. 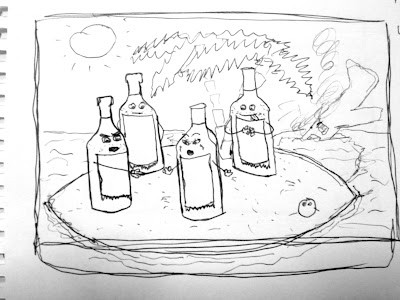 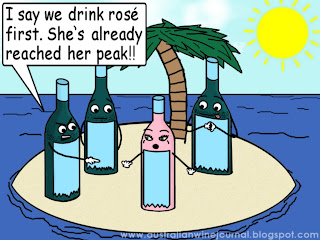 The original sketch here depicts a crashed plane in the background, which I removed for several reasons. Firstly, I didn't think it was necessary. Secondly, I felt the plane made it look like they'd only just arrived on the island, but most importantly, I just couldn't be bothered to draw it. Not sure what happened to the coconut though... 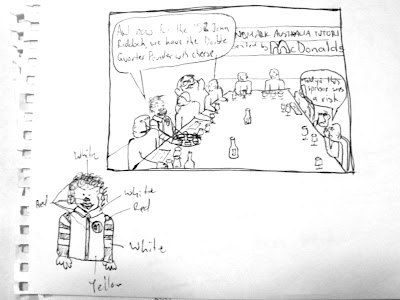 The image in the corner shows how I had to use a reference point for getting Ronald McDonald's colour scheme right. No such problems with Grimace though. 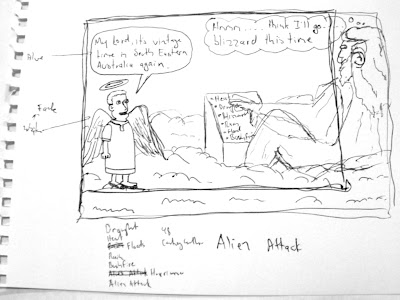 The original sketch here shows God thinking to himself; 'Hmm... think I'll go... blizzard this time', which I later changed to 'alien attack' because it sounds a lot sillier. I was also concerned this toon might look un-p.c. if an Australian vintage is actually destroyed by a blizzard one day... 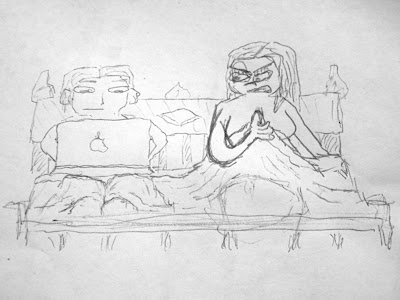 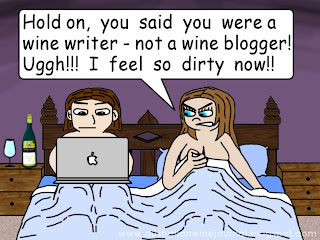 It's rare that I think a finished, digital toon looks better than its original sketch, but with this one, I did.
Additionally, I often like to sneak sly images of some of my favourite Australian wines into Oz Wine Toons. This toon depicts Karra Yerta Riesling - a real 'blogger's favourite' in my opinion, hence its appearance on a blogger's bedside table. 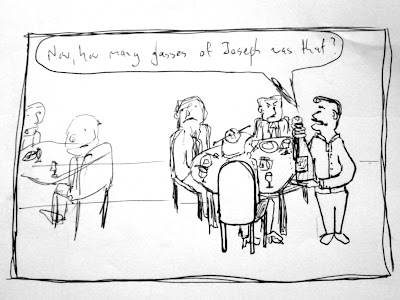 This one just never made it. The finished toon would've shown the diners absolutely covered in overblown sparkling red. 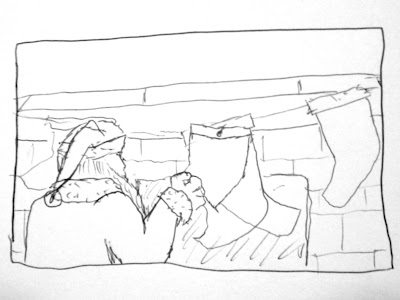 Another one that didn't make it. Without the text, you can't actually tell what's going on here. I remember I was going to use it on Christmas, but a little too much Christmas cheer last year led to me doing a Boxing Day toon instead...
Posted by Chris Plummer at 2:04 AM