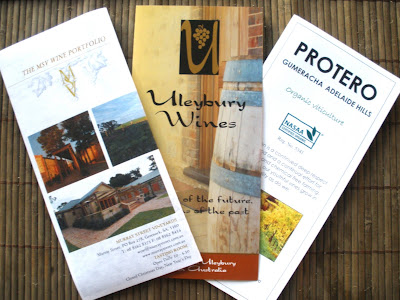 Just a quick couple of notes/opinions I've compiled after my tastings at the Adelaide Food and Wine Expo. I'm focusing on just three small wineries here, but also present at the Expo were wine clubs Wine Selector and The Wine Society, as well as the organic wine group WildFox, who proved very popular with consumers, perhaps largely thanks to their very aggressive 'we're organic guys!' message.
PROTERO - ADELAIDE HILLS
I was most pleased to see Protero as the first winery I encountered today, especially as I quickly noticed the attendance of their nebbiolo. The 2005 Protero Nebbiolo ($60), which narrowly missed out on a top 10 slot in the Adelaide Review's Hot 100, is quite a true nebbiolo for me. It wasn't as fragrant or perfumed as many, but it does reveal raspberry, orange rind and spicy cherry aromas with just a hint of leathery development. The palate was svelte and chewy, with more savoury dark cherry, blackberry and toasty oak nuances held up very aggressively and firmly by an unmistakably dry fistful of nebbiolo tannin. Tannic, structured and age-worthy is the style of nebbiolo Protero set out to achieve, and in my opinion the 2005 succeeds. It'd definitely be worth a look in another 5 years. Certainly the most interesting wine of the day.
Protero also sell their Gumeracha sourced grapes to Coriole for their nebbiolo, which can currently be found in Coriole's 2007 Adelaide Hills release.
Also available from the Protero range was a 2007 Viognier, which is another fine, lean, mineral, clean and textured Adelaide Hills viognier in the increasingly common modern Australian style - good stuff; as well as a 2006 unwooded chardonnay which showed nice textural development and richness from its bottle age, but its 14.3% alcohol just weighed in too heavily on a finish that was too spirity for me. A 2005 Red Blend (Merlot/Cabernet) and a 2006 Merlot (both in the $20-$30 range) were also available, neither of which really left me with any memorable impressions.
ULEYBURY - ADELAIDE ZONE
Uleybury's certainly best known around these parts for their multi-award winning Reserve Semillon, in particular the 2002, so it both surprised and pleased me to see it's still current release. The wine immediately proclaims its development in its toasty, flinty, melon fruit and lemon rind bouquet, which combines freshness with development well. The palate displays the pungent qualities of maturing semillon, with a long finish marked by rich undertones of pronounced honey flavour. It's a very good if not totally mindblowing semillon, but I feel that at $35 it isn't just more expensive than many of the Hunter's wines, it's also more expensive than almost all its emerging Barossa contemporaries, including Peter Lehmann's scene shattering Margaret.
I also tried two reds from Uleybury's range, which were also showing bottle aged characters. A 2005 Sangiovese ($15.50) displayed developed colour with ripe currant-like aromas, but its palate surprised with approachable, juicy, luscious flavour. I think it's better and cheaper than regional neighbours Dominic Versace's efforts with the grape from the same season. A 2004 Shiraz ($19) showed much more convincing colour, with a smooth yet simple palate containing earth and chocolate flavours. Both red wines are appropriately priced in my opinion.
MURRAY STREET VINEYARDS - BAROSSA VALLEY
The four reds available for tasting from Murray Street Vineyards; 2007 Gomersal Shiraz ($35), 2007 Barossa SGM blend ($35), 2006 Sophia Shiraz ($75) and 2006 Benno Shiraz Mataro ($75), all certainly showed a definitive house style. All reds were rich, treacle-like, luscious, dense and concentrated styles in a traditionally ripe and generous Barossa manner, pretty much exactly what you'd expect from a small Barossa maker with loads of experience in the region. Honestly, I expected the two flagship wines from the 2006 season to see a step up in elegance and sophistication over their 2007 stablemates, but it just didn't happen for me. I'm sure these wines would've won a lot of friends on the day for their generosity and style, if not for their price tags.
If anyone's interested Murray Street's Benno Shiraz Mataro is named after the same Benno Seppelt as Seppelt's Bendigo sourced Benno Shiraz (Benno, Benno, Benno - I love that name!), but Murray Street have been making theirs for longer (just!).
Murray Street also presented a 2009 Viognier Marsanne, which for me was all about sweet, ripe viognier fruit in the luscious, pungent apricot flavour spectrum. It was very far removed from Protero's more refined effort I'd had earlier in the day, and it surprised me to learn that Murray Street's was the more expensive of the two, weighing at a rather hefty $35.
Posted by Chris Plummer at 3:07 AM