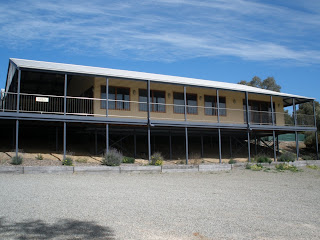 Tim Adams is a producer in peak form who continues to go from strength to strength. Along with makers like Grosset and Wendouree, they truly fly the flag at the quality end of what Clare can achieve.
Where Tim Adams comes into his own though, is with a couple of varieties which aren't typically associated with the Clare Valley.
Tim Adams regularly defies the critics with his pinot gris, which from 2009 has produced another full flavoured, character filled gris with mouthfilling flavour, and ample structure. It's about as far away from the flat and lifeless water-like gris as you'll get for $18 in Australia right now. The lightly oaked Tim Adams semillon continues to fight for the title of Clare's best with another solid release from 2008.Tempranillo is the latest addition to Tim Adams's arsenal and early results are very promising. The second release of his Reserve Tempranillo from 2006 contains the depth of colour, flavour and aroma which is missing from so many, whilst sticking well within varietal boundaries. It completely belies the fact its vineyard was planted in 2004.
The Fergus blend of grenache with Bordeaux varieties and shiraz reached a very high standard in 2006, ideally marrying the more subtle, savoury nuances of grenache with cabernet sauvignon's structure to produce a totally impressive, surprisingly complex and supple, rustic wine.
Tim Adams' 2008 Rieslings are the real highlight here though. The standard release is again impeccable, with well defined lemon/lime varietal fruits, great length and sharp acidity. If it isn't the best sub $20 riesling in Clare I don't know what is. While in just its third incarnation, Tim Adams' Reserve Riesling blew me away for the third straight year. The 2008 is searingly intense, with exquisite purity to its juicy, mineral lemon fruit base. If you ask me, this wine is the biggest threat to Grosset's Clare riesling crown.
On another note it was good to meet Tim Adams' neighbour Fergus' daughter, who was working at the cellar door. She has great people skills and is very well suited to cellar door operations. Tim Adams will hopefully make a much better home then her previous place of employment; the now defunct Leasingham winery which shut its doors not long ago.
All Tim Adams wines are ridiculously undervalued, especially at the cellar door where they sell at or below discount retail price.
THE WINES
Tim Adams Riesling 2008 ($18) Wonderful, full flavoured apple/lime/pear palate with great intensity to its fruit base. It's framed by very shapely, chiselled acidity, before leaving a very persistent note of lime lingering in the mouth. 95
Tim Adams Reserve Riesling 2008 ($29) Wow! Fantastic purity and clarity to pronounced lemon and mineral characters. Palate has a slightly juicy feel to it with good mid palate depth, it's almost sumptuous, but it's all driven away by a searingly intense, racy cut of powerful, uplifting, crystalline-like acids which push the wine into a finish of exceptional length and impact. Hint of grapefruit evident in finish. Magnificent riesling for acid freaks. 96
Tim Adams Semillon 2008 ($18) Another woefully underpriced wine. Lightly oaked (5 months?) sumptuous and juicy semillon with toasty oak, grilled nuts and pungent melon/citrus fruits. Finishes dry and savoury with good length and acidity. Should be another perfect medium term semillon from this maker. (full review soon) 92
Tim Adams Pinot Gris 2009 ($18) I thought the 2008 (92pts) was the best Tim Adams' Pinot Gris I've had, but it might've met its match with the 2009. Slight blush pink colour, with plenty of nutty, pear and waxy lemon citrus characters evident. The palate has a rare intensity of flavour, body and structure for such a cheap Australian gris, making it too intriguing a prospect to pass up for even a gris doubter such as myself. (full review soon) 91
Tim Adams The Fergus 2006 ($19) Floral, grenache influenced perfume of ripe blueberry and violet aromas with deeper notes of spicy chocolate oak, meat and cloves. It's medium bodied and silky smooth, with cabernet providing the structure to a supple, complex and rustic balance of savoury, earthy red fruit flavours. Fine, long, focused finish with lingering spice. Outstanding value again. 92
Tim Adams Reserve Tempranillo 2006 ($29) Looks good in the glass with a deep tone to its dark purple/black colour. This transfers over to both aroma and palate, with dark berry fruits, cherry cola and chocolate licorice notes evident. Very smooth and concentrated, medium-bodied wine framed by finely powdered, gentle tannins. It's almost impossible to believe this wine was made from 2 year old vines. (full review soon) 92
Tim Adams Cabernet 2005 ($19) The only let down here but it wasn't exactly a great year in Clare. It's very ripe, meaty and treacle like, with stewed fruit characters. Still, I've seen much worse at $19.... 86
Tim Adams Shiraz 2006 ($19) A bit of a closed, introverted nose with savoury red and dark fruits joined by chocoalte/vanilla oak and spice. The rich palate is medium-full and pleasing, providing an even ripeness of flavour which should make for good drinking over the shorter term. 90
Tim Adams The Aberfeldy Shiraz 2006 ($44) Compellingly vibrant nose. Jujube-like fruit profile complemented by assertive chocolate/coconut-like oak. Medium-bodied Clare style with juicy fruit palate, lightly spicy finish and good, but not aggressive tannins. Extremely drinkable and approachable, but I'm knocking one point of my previous score for this (June-2009) because its American oak is looking a bit more prominent now. 93
Tim Adams 20 Yr Old Fine Tawny Port ($35) Quite a pleasing, rich, full style of Australian port with lots of good savoury, nutty characters and a welcomed dryness. Rather thick, heavy and impactful too. Great length. 92
Posted by Chris Plummer at 1:34 AM