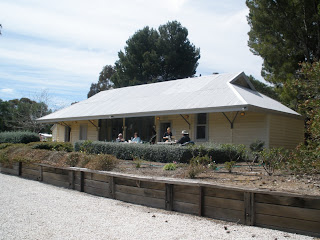 Situated in the restored Auburn train station, Mount Horrocks sits about 200 metres south of Grosset's cellar door, which I'm sure helps business. It also houses a popular little eatery named Station Cafe which is famous for quaint, light lunches; also good for business. Owner Stephanie Toole is a very talented winemaker, which is excellent for business.
Unfortunately, the last few, very difficult seasons have made things difficult for most Clare wineries, including Mount Horrocks. This is most apparent in their 2007 Shiraz and 2009 Riesling.
Usually my favourite Mount Horrocks wine, the Cordon Cut Riesling, disappointed me with the 2008. Its developed, golden yellow colour foretold a rather ripe, peachy wine which lacked its customary drive, length and freshness.
On the plus side, Mount Horrocks delivered yet another delicious, deeply flavoured, handsomely oaked and shapely semillon from 2008. I easily rate them alongside Mitchell and Tim Adams as a group of Clare wineries producing very under rated, high quality, oaked semillon.
After going over my tasting notes I've noticed Mount Horrock's Chardonnay wasn't in attendance. I'm not sure if this wine is being continued or not, but personally I think the less Clare wines made from Burgundian varieties the better.
For interest we ate at the Station Cafe. Everyone ordered the same thing; Osso Bucco. The food was as I've come to expect from the venue; a nice light lunch made in a home cooked country style, which made a fantastic precursor for an afternoon of wine tasting. It wasn't an exceptional meal like the coconut fritters with smoked salmon and lime aioli I had there a few years back, but the veal was 'fall off the bone' tender, the garden vegies provided a freshly flavoured side, and the garlic/parsley/lemon zest garnish was right on the mark.
THE WINES
Mount Horrocks Riesling 2009 ($25) Rather ripe, round and peachy wine with more stonefruit than citrus evident. Lacks necessary drive and sharpness. 85
Mount Horrocks Semillon 2008 ($23) 8 months French oak. A wine with good acidity and length. Its melon fruit flavours are overcome by toasty cedar oak at this young stage, which powers the wine into a finish with brisk, grapefruit like acids partnered by oak characters. 90
Mount Horrocks Shiraz 2007 ($28) Over ripe. Cooked dark fruits smoothed over by sweet oak in a fashion that seems to of become the hallmark for many South Australian 2007's. Had one of my friends making an unimpressed 'squinty' face. 84
Mount Horrocks Cabernet Sauvignon 2006 ($28) Has 10% merlot added which gives itself away immediately on the nose with leafy, eucalypt notes across its blackcurrant fruit. Not a bad wine really, which is keenly balanced in a dark fruited, medium to full style, but I'm not sure where Halliday got 95 points from (whose review is displayed prominently on the tasting bench). 89
Mount Horrocks Cordon Cut Riesling 2008 ($30) Developed yellow-golden colour. Toasty, vanilla oak and peach/nectarine nose. Palate is peachy and sweet, moderately luscious for this wine, but lacks length of fruit and refreshing acidity. 88
Posted by Chris Plummer at 12:17 AM