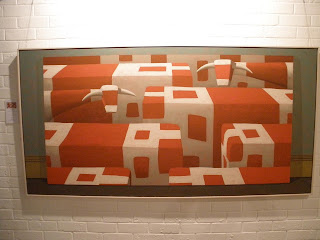 Here's a picture of my favourite painting from Leeuwin Estate's art gallery. Admittedly the photo isn't great as the downlight mounted above the painting really played havoc here, as did my laziness and lack of attention.
This painting appeared on Leeuwin's 1997 Art Series Cabernet Sauvignon. Interestingly enough it's the same label Langton's chose for the Art Series Cabernet Sauvignon on their last Classification of Australian Wine poster. I remember thinking this was a computer generated image when I first saw it on the bottle. Obviously it isn't, it's a very large painting, and full of beautifully human flaws too. I love the modernism, depth, light and shade, simplicity and form here. Thought provoking stuff.

Posted by Chris Plummer at 4:53 AM