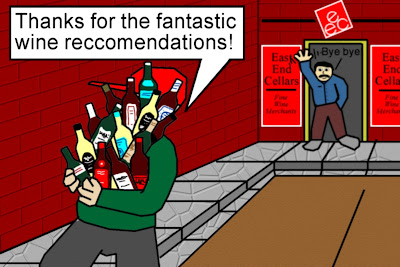 I've already written a couple of posts on some of my 'lesser' experiences at bottle shops so it's only fair that I write about the better ones as well.
East End Cellars, just off Rundle Street down Adelaide's trendy east end, is one of Adelaide's true independent bottle shops. Alongside the Ed at Mitcham and Melbourne Street Fine Wine, it's easily one of our very best wine retailers. Other than a large, diverse range of outstanding wines, EEC also has excellent staff. They're all genuine experts in the field and they always treat their customers with utmost respect.
Several years ago I was shopping at EEC, in search of a good bottle of Margaret River chardonnay for around $30 (strange, I think I started one of these previous stories on a similar quest). Unfortunately I couldn't find one (which isn't surprising here in Adelaide) and when the store attendant confronted me he also admitted they were unable to meet my direct needs.
The attendant initially tried to point me in the direction of some Adelaide Hills chardonnay, then some Victorians. I told him it wasn't really what I was after, so we proceeded to walk throughout the store together. I sighted a bottle of Cape Mentelle's Sauvignon Blanc Semillon and told him I enjoyed that wine, but it too wasn't what I was after. "Oh", he quipped. "You must try this then".
He then presented to me a bottle of Cullen's 2006 Mangan Sauvignon Blanc Semillon. This was the first vintage of Cullen's just released Mangan SBS and as such I'd never had it before. I was very familiar with the Cullen Vineyard SBS though, so he had me interested. The salesperson correctly informed me it was an oaked SBS and how it should display some similar texture, complexity and style to chardonnay, whilst retaining the regional quality I desired (he also told me it made the Cape Mentelle look very boring by comparison). It was $35 but his very informative and articulated sales pitch had me, so I took one home.
Once home I drunk the bottle and loved it. It contained not just all the features the attendant had told me it would but also all the features I was after (I gave it 95 points for interest). Cullen's Mangan is now arguably my favourite expression of an Australian sauvignon blanc/semillon blend, and I buy 3 bottles of every vintage, including putting one aside for 5-8 years cellaring. In some respect, I feel I owe part of this love to the staff at East End Cellars, without whom I might not have bought the wine in the first place.
To say the least, the information and recommendation from the EEC staff member was a hell of a lot better than that of another, different bottle shop salesperson, who told me I should be drinking New Zealand sauvignon blanc instead of chardonnay (see Drawing a Blanc contd... under my July posts).
Oh yeah, I can guarantee no EEC salesperson would allow a customer to leave the store with a dozen bottles of wine without at least a box! :)
Posted by Chris Plummer at 9:47 PM