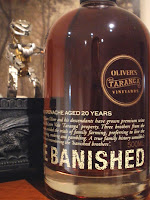 - McLaren Vale, SA
- $28-$34
- Cork (Capsule)
- 19.0%alc
Here's a bottle which I previously looked at in the back reviews section of this website, but after downing another bottle on the weekend, I feel it completely deserves the full review treatment. It's a fortified grenache produced from base wines with an average age of 20 years by Oliver's Taranga, a McLaren Vale winery whose exceptional products deserve far greater recognition than they receive (as do their cellar door staff Briony and Trudy - love your work guys!).
Golden/caramel brown in the glass, it slowly unfolds to rich, honeyed aromas of fruitcake, sweet toffee and gentle spice, with a surprisingly pleasing level of restraint and integration. Thick in texture, with a flow akin to melted butter, the luscious palate displays a gently understated intensity of its mature caramel mudcake, orange peel and tea flavours, supported by undertones of stonefruit and dried apricots. It finishes long and persistent with a delicious aftertaste of sweet nuttiness complemented by moderate alcoholic warmth.
ü+ The Banished is an incredibly clean and balanced 20 year old fortified. It's fresh as a daisy but with enough mature, complex elements to keep the most discerning of drinkers happy. Fortified fans should 'unbanish' this, now. You won't regret it. Drink now.
94 points
www.oliverstaranga.com
Posted by Chris Plummer at 5:32 AM