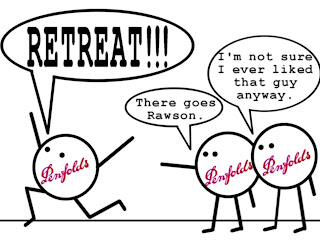 While reading the blog of highly respected English wine scribe Andrew Jefford (lover of all things terroir driven with minimalist intervention - and fair enough), I picked up that a very influential Penfolds' employee would like to see the Rawson's Retreat label abandoned, with their lower-end focus shifting more towards Koonunga Hill. Hurrah!
It's about time Penfolds considered restructuring their overcrowded entry range, where Rawson's Retreat, Koonunga Hill and Thomas Hyland (with 6, 9 and 5 wines in each range respectively and several styles overlapping) are essentially battling it out against each other. Today you could walk into a liquor store and chose from a Penfolds Rawson's Retreat Cabernet Sauvignon, Penfolds Koonunga Hill Cabernet Sauvignon or a Penfolds Thomas Hyland Cabernet Sauvignon for only a few dollars difference. Most wineries have enough concern competing against other wineries, let alone themselves!
In its defense Rawson's Retreat is usually the cheapest of the three, but the price difference is quite minimal, and with inevitable discounting the pricing of these labels tends to move about like three drunk teenagers in the back of a Holden Sandman circa 1975, you never know who's on top or bottom!
Koonunga Hill Shiraz Cabernet and Thomas Hyland Chardonnay are the clear standouts in these ranges. Personally I'd be happy to see Penfolds focus their base range around these two, consistently over achieving wines. Perhaps they should retain the Koonunga Hill label for reds and Thomas Hyland for whites? Thomas Hyland already contains a majority of whites in its range, as Koonunga Hill does for reds.
I'm sure some would say give Thomas Hyland the flick as well, but it would sadden me somewhat to see that chardonnay disappear.
Whatever direction Penfolds heads in, I'm just happy to hear some sensible change might be approaching. Hell, maybe these corporate brands aren't so bad after all?
Posted by Chris Plummer at 12:34 AM